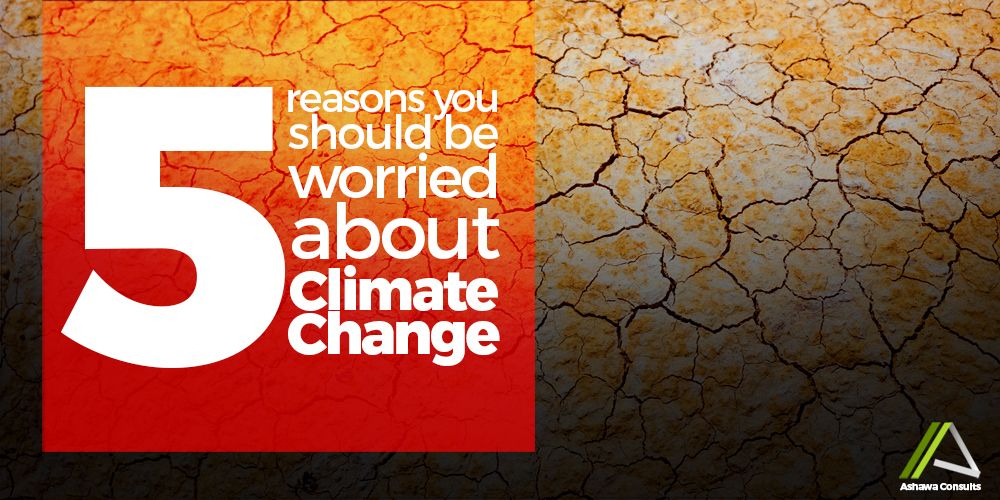 Scientists have predicted that over the next 100 years, the global temperatures will rise from 1.4°C to 6.4°C.  Climate Change is also known as Global Warming, which results from increase in the average temperature of the earth. Experts say greenhouse emissions, a result of unprecedented industrialization across the world, is the cause of global warming.  If you still shrug your shoulders in denial, here are some of the reasons you should be concerned about climate change especially in Africa.

Water is a key resource for both commercial and domestic usage. The global warming will disturb the water cycle. It will ensure some places experience increased rainfall which leads to flood while some areas experience increased drought. This might make water very scarce in the areas droughts are experienced which would directly affect the cost of access to water supply and its availability. Water may not be sufficient for food production and droughts can support new diseases, which are uncommon in the areas affected.

Food production will be terribly affected by climate change. Due to the change in the temperature and water cycle, certain crops will be difficult to cultivate such as wheat, maize and rice. The new seasons will require new behaviour and practices to sustain food levels. Unless this happens, the shift will continue to cause a crop failure. This would lead to low productivity of farms and thus increased prices for the few food available. Asides this, there will be increased desertification. One prominent climate scientist has used IPCC data to predict that by 2100, Chad, Niger and Zambia could lose practically their entire farming sector due to climate change.

The periodic rise in temperature will not only make it difficult to farm and produce good crops, it will affect the types of disease that become prevalent. However, no one is yet able to predict the diseases that will arise due to global warming. An increased frequency of heat waves may also directly affect people, and sometimes lead to death. Climate change is already linked to the deaths of 400,000 people each year, and it comes with an annual bill of $1.2 trillion. The costs are only set to rise. Unfortunately, it would not be fairly distributed. Developing countries are expected to be hit hardest, while many of the world’s biggest polluters will get away with a smaller bill.

About 2 % of the world’s water is currently ice. Due to global warming, the ice might thaw and cause a rise in water levels to as much as 70 metres. Some countries will be lost altogether due to climate change as they will disappear under rising water level.  Examples of this could be Kiribati and the Philippines. Kiribati’s president is currently seeking solutions to ensure his people survive the potential loss of their country to rising water levels.  In Africa, Lagos, Abidjan, the Niger Delta, Dar-es-Salam, Malindi are suffering from varying consequences of rising sea level which includes flooding, beach erosion, deforestation and salt water intrusion.

Ashawa Consults provides services that can help your company make the right decisions without short-changing the world. Go green with Ashawa. Contact Us now.