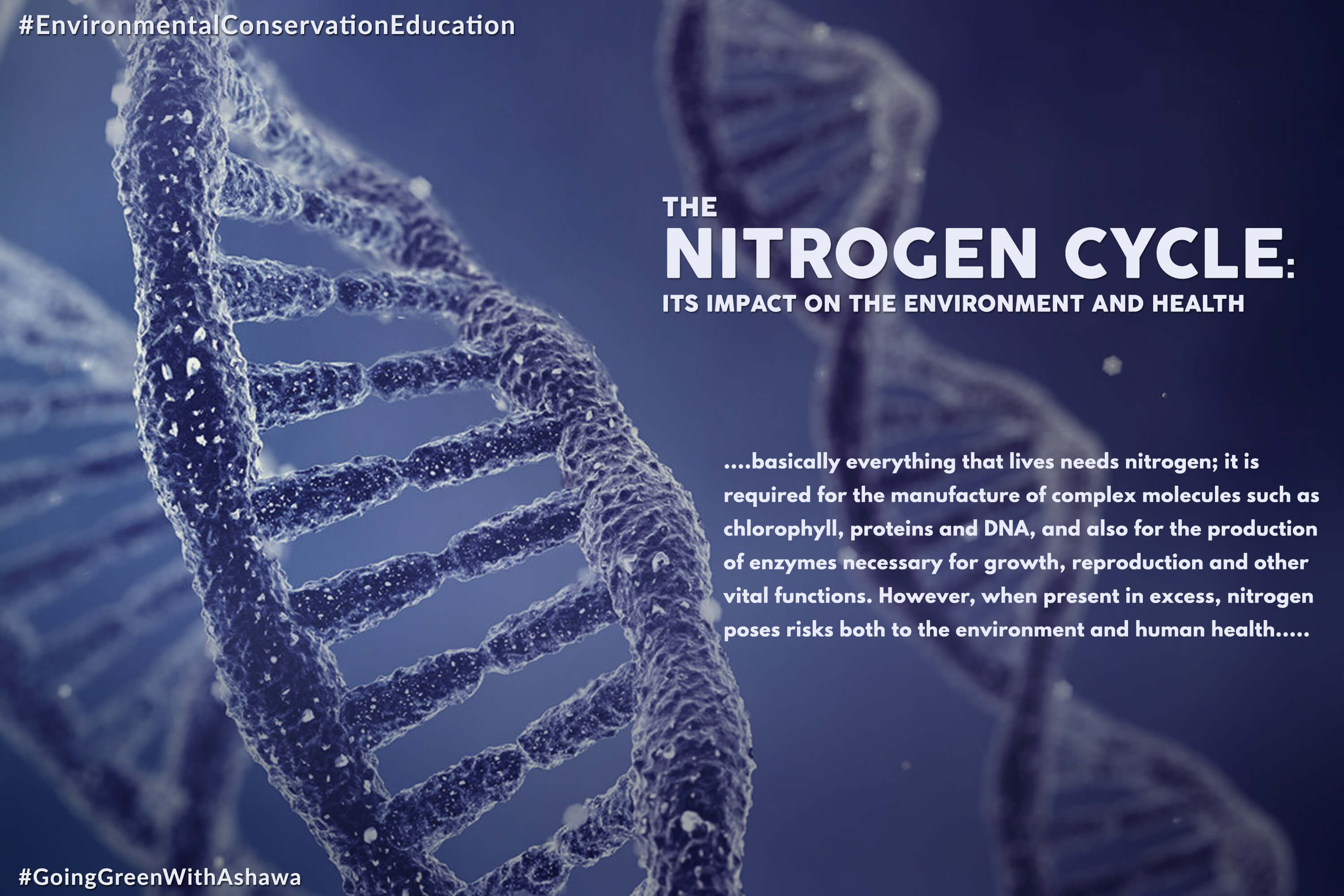 Nitrogen is necessary for life on earth to continue and the nitrogen cycle is one of the most important nutrient cycles in terrestrial ecosystems. Everything that lives needs nitrogen; it is required for the manufacture of complex molecules such as chlorophyll, proteins and DNA, and also for the production of enzymes necessary for growth, reproduction and other vital functions. However, when present in excess, nitrogen poses risks both to the environment and human health.

The natural cycle of nitrogen is complex; although the concentration of nitrogen in the air is one million times its concentration in living organisms, it is not readily available for use. There are three main ways by which nitrogen can naturally be made available for use in ecosystems. Firstly, by plants themselves, when bacteria, most notably those associated with leguminous (bean or pea) plants, trap nitrogen from the air and combine it with hydrogen to form ammonia (NH3). The decomposition of plants and animals also releases organic nitrogen into the soil as ammonia. Bacteria and fungi in the soil then convert this ammonia into ammonium (NH4), which can be used by plants. Further chemical reactions by nitrosomonas bacteria transform the NH4 into nitrite NO2-. The nitrobacter bacteria then convert the nitrite NO2– to NO3– nitrate. This nitrate is very soluble, and can also be used by plants. The cycle is concluded when denitrifying bacteria in soil convert nitrates in anaerobic soil to either nitrogen gas (N2) or nitrous oxide (N2O) and these gasses then return to the atmosphere. 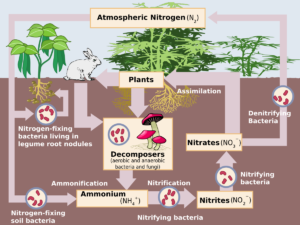 Nitrogen is also obtained from two other natural sources. The energy from lightening converts oxygen and nitrogen to nitric oxide (NO), which then oxidizes to nitrogen dioxide (NO2), and then to nitric acid (HNO3). These compounds are then carried to the ground in rain or snow. This process contributes between 5 to 8% of the total amount of nitrogen removed from the atmosphere. Finally, some free-living bacteria can also trap nitrogen and convert it to nitrate.

Human Influences on the Nitrogen Cycle

There has been a recent intervention in this complex cycle. Human modification of the nitrogen cycle has been profound and human activity now removes approximately 120 million tons of nitrogen from the atmosphere into reactive forms every year, more than all of the Earth’s terrestrial processes combined.

As a result of extensive cultivation of legumes, growing use of the Haber-Bosch process in the creation of chemical fertilizers, and pollution emitted by vehicles and industrial plants, human beings have more than doubled Â increased the annual transfer of nitrogen into biologically available forms. In addition, humans have significantly contributed to the transfer of nitrogen trace gases from earth to the atmosphere and from the land to aquatic systems. Human alterations to the global nitrogen cycle are most intense in developed countries and in Asia, where vehicle emissions and industrial agriculture are highest.

Nitrous oxide (N2O) has risen in the atmosphere as a result of agricultural fertilization, biomass burning, cattle and feedlots, and industrial sources. N2O has deleterious effects in the stratosphere, where it breaks down and acts as a catalyst in the destruction of atmospheric ozone. Nitrous oxide is also a greenhouse gas and is currently the third largest contributor to global warming, after carbon dioxide and methane. While not as abundant in the atmosphere as carbon dioxide, it is, for an equivalent mass, nearly 300 times more potent in its ability to warm the planet.

Ammonia (NH3) in the atmosphere has tripled as the result of human activities. It is a reactant in the atmosphere, where it acts as an aerosol, decreasing air quality and clinging to water droplets, eventually resulting in nitric acid (HNO3) that produces acid rain. Atmospheric ammonia and nitric acid also damage respiratory systems.

Fossil fuel combustion is a primary contributor, but so are biofuels and even the burning of hydrogen. The higher combustion temperature of hydrogen produces more NOx than natural gas combustion.

As nature’s ability to process this excess nitrogen and return it to the atmosphere is overwhelmed, nitrogen compounds build up in the air, water and the soil. The only way that nitrogen can return to its original inert state is through the action of the anaerobic bacteria.

Fertilizing the Earth with Nitrogen

Plants need nitrogen to grow and there are not able to use the nitrogen that is in the atmosphere for this, even though there are tons of it available. It’s just not in a form that plants can use. So, they get the nitrogen they need from the soil where bacteria have converted it into a usable form. In natural conditions, plant growth is limited in many places by the amount of usable nitrogen that is available in the soil. To grow more crops, people have been transforming nitrogen from the atmosphere into nitrogen fertilizers and then adding the fertilizers to the plants. This has been very successful over the past century, allowing people to farm on lands that had not been as productive in the past, and to produce enough food for growing populations of people. However, fertilizers are often overused, and that can cause problems.

When the nitrogen-rich waters make their way downstream to the ocean, they cause even more problems. Every summer for more than 30 years, high nitrogen levels at the Mississippi River Delta have caused a dead zone where the water empties into the Gulf of Mexico. This dead zone, in which oxygen levels are too low for animals to survive, covered more than 8000 square miles (more than 20,000 km2) of ocean in 2001. It forms when nitrogen in the water causes algae to grow and reproduce very quickly. As the huge amounts of algae die and decompose, oxygen in the water is used up. Animals cannot survive without oxygen. They flee to another part of the ocean if they can, or they die. Although it is one of the larger dead zones in the world today, the dead zone in the Gulf of Mexico is not one of a kind. There are about 150 dead zones in the world’s oceans. Almost all of them are located at the mouths of rivers where fertilizers and other nutrient sources like sewage and livestock waste are added to the seawater.

Releasing Nitrogen Pollutants to the Air

Nitric oxide (NO) and nitrogen dioxide (NO2) molecules form during combustion in car engines, power plants, and factories contributes to smog formation when combined with oxygen molecules and the fumes from paint and gasoline (called Volatile Organic Compounds). They can also contribute to acid rain if mixed with water vapor, turning into nitric acid. Nitrogen dioxide will break apart in sunlight and the free oxygen atoms latch onto oxygen molecules forming dangerous ground-level ozone.

Additional risks posed by increased availability of inorganic nitrogen in aquatic ecosystems include water acidification; eutrophication of fresh and saltwater systems; and toxicity issues for animals, including humans. Eutrophication often leads to lower dissolved oxygen levels in the water column, including hypoxic and anoxic conditions, which can cause death of aquatic fauna. Relatively sessile benthos, or bottom-dwelling creatures, are particularly vulnerable because of their lack of mobility, though large fish kills are not uncommon.

Ammonia (NH3) is highly toxic to fish and the level of ammonia discharged from wastewater treatment facilities must be closely monitored. To prevent fish deaths, nitrification via aeration prior to discharge is often desirable. Land application can be an attractive alternative to the aeration.

Impacts of Excess Nitrogen on Health

Aside from being a respiratory irritant, nitrous oxide (N20) is also one of the three most important greenhouse gases, being almost 300 times more potent as a greenhouse gas than carbon dioxide. Nitrogen oxides emitted from aircraft also act as a catalyst in the destruction of the stratospheric ozone layer, thereby increasing exposure to ultra-violet B radiation, with resulting impacts on the incidence of skin cancer, the immune system and cataracts. High levels of nitrates in water can result in the condition of methaemoglobinaemia, condition usually found in very young babies, where the haemoglobin is unable to carry oxygen properly, and results in cyanosis. Nitrates are also a precursor of N-nitroso compounds, and while there is strong biological plausibility for nitrates in drinking water as a possible cause of cancer, the epidemiological evidence is weak.

Application of fertilizer to our farm land, burning of fossil fuel etc has not been without environmental cost.  The enormous amounts of fertilizer being used cause changes in soil salinity, and composition.  Runoff of nitrates into water systems promotes the growth of algal blooms, which destroy water quality.

Aside from recognizing the vital importance of conserving our wetlands, the habitat of the denitrifying bacteria which enable nitrogen to return to the atmosphere, there are several ways by which we can work to restore the balance to the nitrogen cycle. Firstly, we need to consume less; one third of the food we buy is not eaten and we can also reduce our consumption of food that has been intensively farmed. Secondly, we must continue to improve the quality of our waste water treatment plants. Finally, we need to reduce our consumption of electricity derived from fossil fuels and increase our use of public transport. The nitrogen cycle is one of our human life-support systems, supporting human life and life on our planet. Our disruption of the nitrogen cycle is a public health issue of profound importance.

THE ROLE OF MAN IN SPECIES EXTINCTION

5 REASON YOU SHOULD BE WORRIED ABOUT CLIMATE CHANGE

5 CREATIVE THINGS TO DO WITH OLD TOYS